I’ve followed the issue of Temporary Modular Housing (TMH) in Vancouver fairly closely, so was glad for the opportunity to learn more about it as part of the annual Housing Central conference in Richmond a couple weeks ago, in a session called “New Options in Temporary Housing.” It covered both Vancouver’s pilot TMH project at 220 Terminal Ave. and the Vacant Homes program run by Richmond’s Chimo Community Services.

For starters, I learned that the main reason “temporary” modular housing is referred to that way is because it’s built to be moved – and not because, as some have suggested, it’s flimsy or of poor quality. Deconstruction and moving takes a toll on these structures, which is the main reason their lifespan is about 40 years, rather than any lesser quality of materials or construction. They are built to the same BC Building Code standards as other types of housing.

However, putting together these units in a factory in a standardized way does increase the speed at which they can be built (two per day) and decrease their cost. They can be built for about $75,000 per unit, not including land – at least this was the case in Vancouver’s pilot project – costs may vary with other suppliers.

Anyone who’s followed Vancouver’s recent debate over TMH in Marpole will know that one of the main objections protesters have raised is proximity to schools. Presenters addressed this “Why here?” question directly with a slide listing the various interrelated and overlapping factors the city wants to weigh and satisfy when looking for suitable TMH sites: 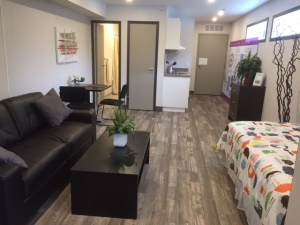 Interior of a TMH display unit the City of Vancouver set up at Robson Square in September 2017.

Given that protesters are continuing their to efforts to stop the TMH construction in Marpole, the city’s intention to get a injunction allowing it to continue building, the need for enough sites to house 600 homeless people, and a welcome rally that Marpole high school students have planned for this Tuesday, TMH is likely to be in the news for the next few weeks at least. The city’s TMH web page is a good place to check for updates.

The Vacant Homes Project in Richmond

The other example of temporary housing covered in this session was Chimo Community Services’ Vacant Homes project, which has housed about 50 people since it began in 2013, using 15 houses that would likely otherwise have remained vacant.

The program got started as a partnership between Chimo and a local property developer, which had houses sitting empty while waiting for building or development permits from the City of Richmond. The program was good for the owner of the properties because it brought in rental income and kept the houses more secure.

Presenters said that one of the unexpected challenges of the project has been negative reactions from some neighbours when they find out who’s living in the houses. However, overall, the project has been a success. For those who would like to replicate the program in their own communities, advice from presenters included the following:

If you’re interested in learning more, I recommend reading this 2014 news story about the project: Richmond nonprofit makes most of empty homes

Next year’s Housing Central conference begins Nov. 18, 2018 and will be in Vancouver. As with previous years, it will likely include dozens of educational sessions spread over at least three days – definitely something to plan for if you’re interested in affordable housing. Follow @BCNPHA on Twitter for the latest on conference and BC nonprofit housing news.